The Society is proud to announce two new publications for 2018! 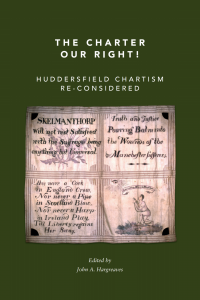 The first is The Charter Our Right! Huddersfield Chartism Re-Considered, edited by John A. Hargreaves. This illustrated 126-page paperback is an edited collection of essays which explore Chartism and popular radicalism in Huddersfield, and retails for £9.95. You can order your copy online via our shop.

The Huddersfield district lay at the centre of many of the social and political protest and reform movements of the first half of the nineteenth century – Luddism, the war of the unstamped press, the ten-hours factory campaign, opposition to the new poor law, parliamentary suffrage and municipal reform. This rich collection of research essays affords new insights into the nature of Chartism as an expression of popular grievances and aspirations for a better life. It will both deepen the understanding of Chartist scholars nationally and inform local readers of a heritage to be celebrated with pride.
— Professor Edward Royle, The University of York 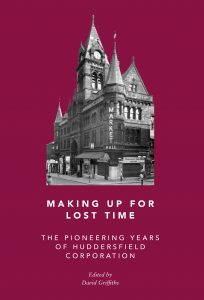 The second book is Making Up for Lost Time: The Pioneering Years of Huddersfield Corporation, which will be launched on July 7th. This illustrated 128-page paperback will retail at £8.95 and is now available to order.

Huddersfield became a Municipal Borough in 1868, two decades after many of its neighbours, but rapidly became a champion of civic enterprise. This new book explains the delay, describes the town as it was on the eve of incorporation, and explores the priorities, the politics and the personalities of the new Corporation’s first half century.

Joseph Batley (1824-85) was clerk to the Huddersfield Improvement Commissioners from 1865-68 and the first Town Clerk of the Borough of Huddersfield from 1868 until his death. In its obituary, the Huddersfield Chronicle (23 January 1885) recorded that he “was energetic and unwearying in his efforts to improve the position of Huddersfield”.

Clyde Binfield is Professor Emeritus in History, the University of Sheffield. His publications include So Down to Prayers: Studies in English Nonconformity 1780-1920 (1977). He contributed to and chaired the editorial board of The History of the City of Sheffield (3 Vols, 1993).

Alan Brooke is author of several works on local working class social and political history and co-author, with the late Lesley Kipling of Liberty or Death – Radicals, Republicans and Luddites in the Huddersfield Area (2nd edition, 2012, Huddersfield Local History Society, 2012) and Huddersfield – History and Celebration (Published by Francis Frith, 2005). He also contributed a chapter, on ‘The Whole Hog: Huddersfield Chartism 1838–1855’ to I. Schofield, ed. Aspects of Huddersfield, Wharncliffe Publishing, Barnsley, 1999.

Malcolm Chase is Professor of Social History at the University of Leeds. He has published widely on labour history and radical protest movements. The Merlin Press has recently published a collection of his essays, The Chartists: Perspectives and Legacies, exploring the place of Chartism within the wider framework of Victorian politics (2015), a sequel to his Chartism. A New History, published by Manchester University Press (2007), a French translation of which was published by the Sorbonne University Press in 2013.

Brendan Evans is Emeritus Professor of Politics at the University of Huddersfield and has published widely on historical and political themes. He is researching the career of J.P.W. (Curly) Mallalieu, the Labour MP for Huddersfield from 1945-79, who was a Government Minister in the 1960s.

David Griffiths is a retired local government officer and local historian specialising in the development of the public realm in 19th century Huddersfield. His previous publications include Pioneers or Partisans: Governing Huddersfield, 1820-48 (2008) and Secured for the Town: The Story of Huddersfield’s Greenhead Park (2011).

John Halstead studied at Highburton Church of England elementary school and Penistone Grammar School. He provided copy for the Scissett-based West Yorkshire Advertiser when a schoolboy, graduated from the London School of Economics, and had a ten-year career in the civil service before teaching adult industrial workers on a variety of courses provided by the University of Sheffield. He is a Vice-President of the Society for the Study of Labour History; and after twenty-two years of activity in the field, recently retired as chair of the care and support board of a major housing association.

John A Hargreaves has taught history in secondary, higher and adult education in Huddersfield and Kirklees and is Visiting Research Fellow in History at the University of Huddersfield. He co-edited with E. A. H. Haigh, Slavery in Yorkshire: Richard Oastler and the Campaign against Child Labour in the Industrial Revolution (University of Huddersfield Press, 2012) and with K. Laybourn and R. Toye, Liberal Reform and Industrial Relations: J. H. Whitley (1866–1935), Halifax Radical and Speaker of the House of Commons for Routledge Studies in Modern British History.

Cyril Pearce is a former college and university Lecturer and is currently Honorary Research Fellow in the School of History at Leeds University. He has researched, written and lectured extensively on the history of Huddersfield and district. His Comrades in Conscience (2001 & 2014) explored anti-war activity in First World War Huddersfield.

Matthew Roberts is Senior Lecturer in Modern British History at Sheffield Hallam University. He works on popular politics and protest in the ‘long’ nineteenth century and is currently completing a monograph provisionally entitled Radical Portraits: Heroes and Villains in British Popular Politics, 1809–1848. His chapter in this volume draws on a database of banner inscriptions, which he has constructed. He has also published similar case studies of radical banners in the Manchester region and Scotland.

David Taylor is an Emeritus Professor of History at Huddersfield University. He has written extensively on the history of crime and policing, including Beerhouses, Brothels and Bobbies (2016), a detailed study of the policing of Huddersfield and district in the mid-nineteenth century.