Our newsletter for October is now available to read online or download in PDF format.

For members wishing to receive the discount offer on our latest book, please ensure you enter the coupon code from your newsletter email on the checkout page:

Our newsletter for October is now available to read online or download in PDF format.

For members wishing to receive the discount offer on our latest book, please ensure you enter the coupon code from your newsletter email on the checkout page:

As well as the newsletter, we’d like to draw your attention to the following PDF files:

Our newsletter for September is now available to read online or download in PDF format.

As part of this year’s Heritage Open Days, there’s an opportunity to:

Delve into the past and meet Sir John William Ramsden as he plans the layout of this historic town. Watch out for the Temperance marches and discover how it all began. This and much more in an animated walk into Huddersfield’s history.

Huddersfield’s Proper Job Theatre Co. will be preforming “The Town That Bought Itself” on Saturday 18 September in St. George’s Square. Free performances run from 1pm to 2pm and 3pm to 4pm, and must be booked online in advance: 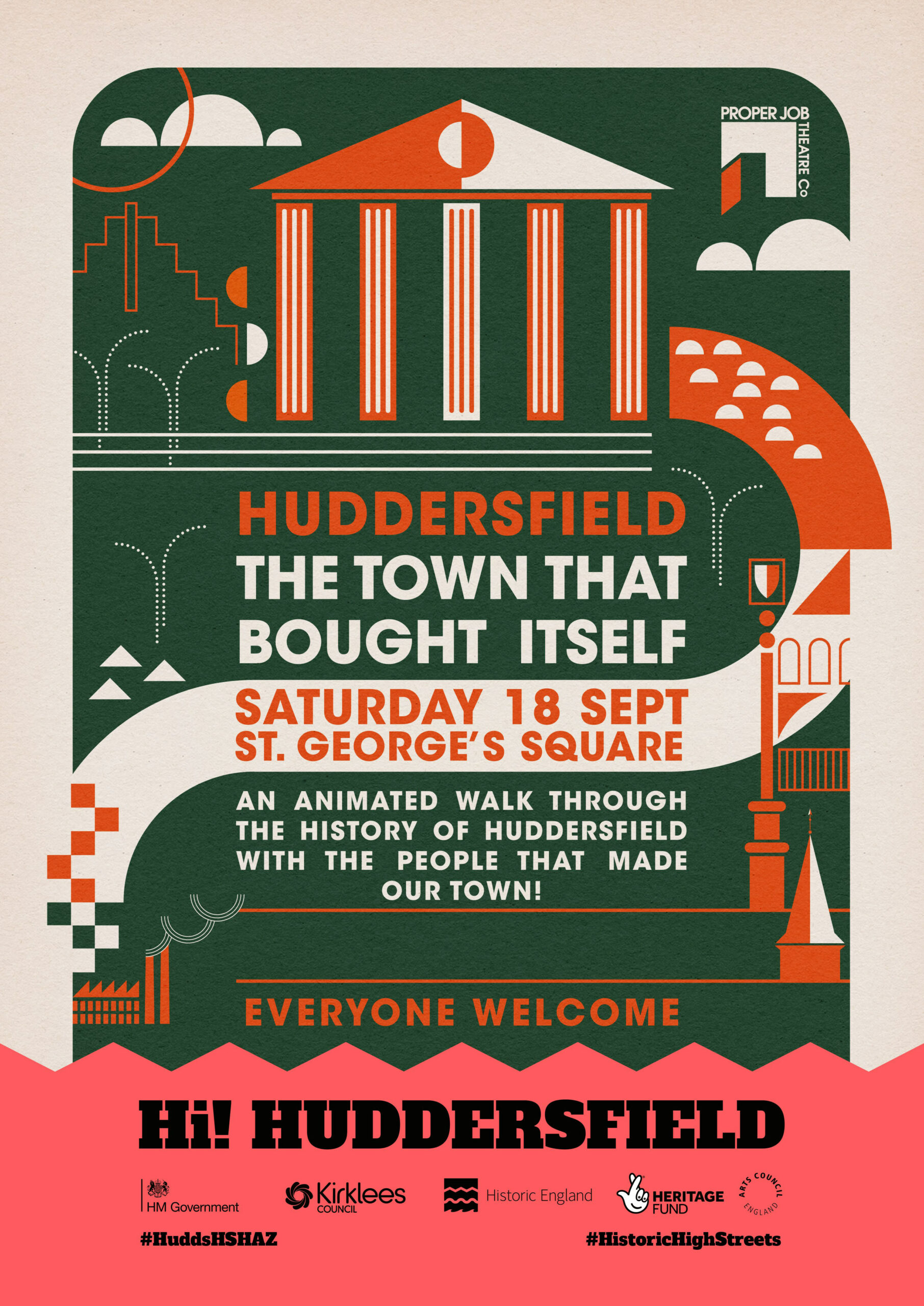 Join local historian David Griffiths on Thursday 15th July 2021, 1 pm for a free online tour exploring the story of the Ramsden family’s impact on Huddersfield from when they purchased the Manor from Queen Elizabeth I in 1599 until they sold out to Huddersfield Corporation in 1920.

The following talks are available to watch online. You can also view them on our YouTube Channel:

The talk took place on the eve of the centenary of Huddersfield famously becoming “the town that bought itself” and coincided with the publication of Power in the Land.

This talk covers the period of the aftermath of the Peterloo Massacre in West Yorkshire and looks at how the event intensified political tensions and polarised opinions, leading to intensified repression by the government and the driving underground of the movement for radical reform of parliament. It also describes some of the social and economic problems affecting textile workers and miners that increased fears of growing class conflict linked to political discontent. The account ends on the eve of the uprising of 1820.

Alan’s talk can also be listened to online or downloaded as an audio podcast.

Dr. Barbara Smith — ‘Wools for the World’ in Railway Street

Dr. Barbara Smith is a volunteer working on the collection of the UK Knitting & Crochet Guild. In this talk for the Huddersfield Local History Society, she recounts the history of two Huddersfield businesses. Greenwoods wool shop was established after the First World War, while Wakefield, Greenwood and Co. was a knitting yarn business which grew out of it, supplying shops throughout the UK and overseas.

In 2020 the Huddersfield Thespians celebrated their centenary. In this talk Christine Verguson looks at only one aspect of that long history, their relationship with founder member, actor, playwright and producer James R Gregson, who by 1927 was suggesting publicly that the Thespians had lost their way. Despite Gregson’s sometimes tongue-in-cheek criticisms, the talk – focusing on the early years of the Thespians ending with the Second World War – will suggest that the Huddersfield Thespians did provide Huddersfield’s playgoers with more ambitious and challenging productions than they were likely to experience on the professional stage.

The Highfields area was Huddersfield’s first middle-class suburb, developed from the early 1820s with elegant Georgian houses. It was already home to Highfield Chapel, founded in 1771, which was joined by other significant religious and educational institutions throughout the 19th century. Today, cut off from the town centre by the Ring Road, it is neglected and rarely visited. Presenting historic maps and images and contemporary photography, David Griffiths explains how and why the area developed, explores its buildings and institutions, and introduces some significant 19th century figures who shaped the area and lived there. David’s new book on Highfields can be purchased online from Huddersfield Civic Society.

Peter Burton — The Holme Valley in the Middle Ages

Peter Burton’s talk is the result of years of study of the local landscape around Holmfirth along with long research into document sources in local study libraries and archives. We will hear about these original records for the medieval Holme Valley and about surviving evidence of the period still present in the landscape. Peter will also introduce a few real individuals from the past who lived in the area during the Middle Ages along with their stories.

Despite the interest in shell-shock and mental disability amongst servicemen, little is known about the plight of the mentally afflicted veteran after the armistice and into the interwar years. This talk rediscovers the voices and experiences of ex-servicemen institutionalised within the Ministry of Pensions Hospital at Kirkburton (Storthes Hall), during the interwar years. By focussing upon the written letters of the patients, this talk will present some of the diverse responses of patients to their hospitalisation. Medical men came to regard these patients as incurable cases, rather than as mentally ill ex-servicemen who deserved any special treatment.

Annual Luddite Memorial Lecture — Radicalism in the West Riding, 1790 to 1890

This year’s Luddite Lecture looks broadly at some of the varieties of radicalism to be found in the West Riding during the century following the French Revolution. This includes mention of some of the familiar themes of the Luddite years in Huddersfield but also concentrates on the later years, tracing continuities from the 1830s and 1840s through the mid-century years to the 1880s and 1890s. The lecture looks at some of the social and religious radicalisms that emerged during the century, ranging from the mainstream to the exotic, and introduces some of the more colourful characters who challenged the orthodoxies of Victorian Britain.

“Descent into Silence” is the untold story of an 1821 pit tragedy at Norcroft, near the West Riding village of Cawthorne, in the middle of the industrial revolution. Six boys and four men were killed in a shaft accident when the ascending corve carrying them to the surface plunged almost 120 feet after a chain broke. HLHS member David Hinchliffe, a relative of one of the two 8-year-olds killed, has undertaken detailed research into the circumstances of the tragedy, the backgrounds of those involved and what subsequently happened to the victims’ families. The talk concludes with “Cawthorne Boys” by Wakefield folk singer Dave Hanvey (The Red Shed Players), composed for the bi-centenary Commemorative Service which was held at Cawthorne on 23 May 2021.

Beverley Norris — Servants of Edgerton: Discovering the women who served the Huddersfield elite

Rob Vincent — The History of the Colne Valley Landscape

A long-term resident of the Valley, Rob will unpick its various elements – its field pattern and walls, quarries, the effects of its economy on the settlement patterns, the legacy of Non-Conformism on the hillsides, its roads, canal, railway and tracks, and its reservoirs. But he will stress that it’s the combination of all those things that makes the landscape.

Venn was a contemporary of Methodist founders John Wesley and George Whitefield, both of whom he worked with, and became one of the best-known figures of the eighteenth century Evangelical Revival. He was a hugely popular parish minister in Huddersfield (from 1759 – 1771) and elsewhere. When he resigned due to chronic ill-health crowds implored him not to leave, and he was sorely missed. His ministry left a lasting legacy in the religious landscape of Huddersfield and its surrounds, nationally and even internationally.

Our newsletter for May is now available to read online or download in PDF format.

Our newsletter for April is now available to read online or download in PDF format.

Our newsletter for March is now available to read online or download in PDF format.

Our newsletter for February is now available to read online or download in PDF format.