The Society commemorated the bicentenary of the Luddite uprising in 2012 and decided to organise an annual Luddite Memorial Lecture, on themes from Yorkshire radical history, jointly with the University of Huddersfield.

The 2022 lecture — “Rise Now From Your Slumber”: Peterloo, Song and Protest — was given by Dr Alison Morgan at the University of Huddersfield on Monday 25 April.

The power of song has long been used to give voice to social and political concerns. Dr Alison Morgan from the University of Warwick and author of the “Ballads and Songs of Peterloo”, will explore a range of songs from Luddism to Chartism and consider how there were performed and received.

Dr Alison Morgan’s book, Ballads and Songs of Peterloo, is the first to gather more than 70 contemporary songs and poems about the massacre in a single collection.

Dr Morgan, Senior Teaching Fellow at the University of Warwick’s Centre for Teacher Education, searched online and physical archives to bring the poems back to light after being inspired by Romantic poet Percy Bysshe Shelley’s famously passionate response to the massacre, The Masque of Anarchy – a poem so radical it remained unpublished until after his death.

Dr Morgan said: “Through these poems and ballads we hear the authentic voice of the people. They were written very quickly, in the immediate aftermath of Peterloo, and they capture a real sense of outrage, of grief – and of revolutionary zeal for change.”

A video recording of the lecture will be available soon.

The 2021 Luddite Lecture looks broadly at some of the varieties of radicalism to be found in the West Riding during the century following the French Revolution. This includes mention of some of the familiar themes of the Luddite years in Huddersfield but also concentrates on the later years, tracing continuities from the 1830s and 1840s through the mid-century years to the 1880s and 1890s. The lecture looks at some of the social and religious radicalisms that emerged during the century, ranging from the mainstream to the exotic, and introduces some of the more colourful characters who challenged the orthodoxies of Victorian Britain. The lecture is dedicated to the memory of Prof. Malcom Chase (1957-2020).

Due to the Coronavirus pandemic, the 2020 lecture by Prof Edward Royle on the topic Radicalism in the West Riding 1790 to 1890 is now postponed to a later date. The sixth annual Luddite Memorial Lecture was given by Dr. Janette Martin, Modern History Archivist at the John Rylands Library in Manchester, on the topic Peterloo Retold: 1819-2019.

Dr Martin talked about the many ways in which the Peterloo Massacre of 16 August 1819 has been remembered and retold. From the contemporary commemorative mugs, handkerchiefs, poems, fiction and engravings to the how the City of Manchester has responded across the centuries to this traumatic episode in Manchester’s history. She also explored the reaction of West Riding Radicals on the events in Manchester and how Peterloo was remembered and commemorated this side of the Pennines. Her talk was illustrated with objects and sources from John Rylands Library’s collections.

Janette curated the current Peterloo exhibition at the University of Manchester’s John Rylands Library (21 March 2019 – 29 Sept 2019) and led a project to digitise the Library’s sources on the Peterloo Massacre. Her research interests include nineteenth century radical politics and public history. She is a long-serving member of the Society for the Study of Labour History and Huddersfield Local History Society. In 2012 Janette co-organised a major conference on Luddism in Huddersfield and she was also a key member of the Luddite Link which co-ordinated bicentenary events and commemorations.

For more about the John Rylands Library including opening hours go to https://www.library.manchester.ac.uk/rylands/ 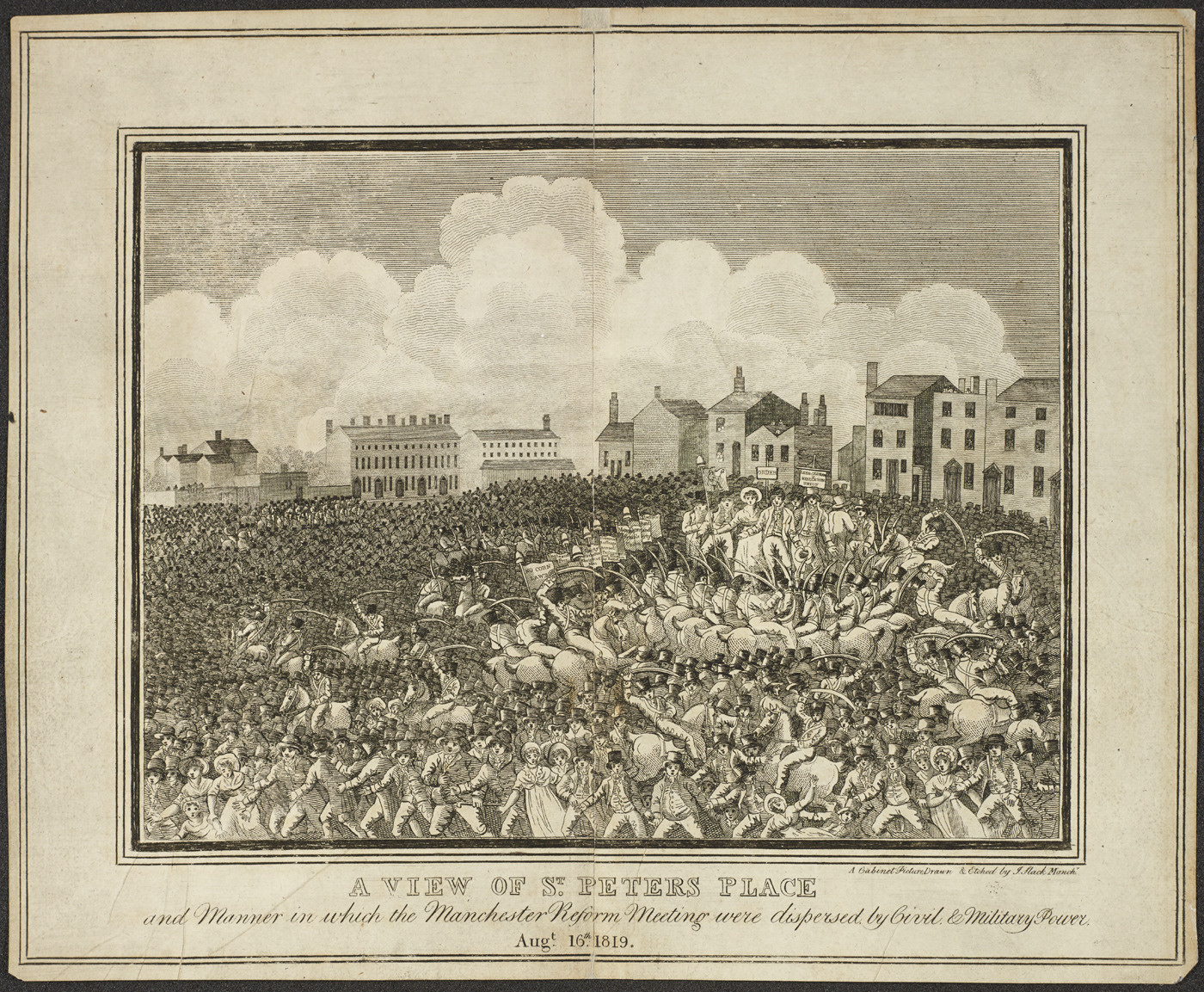 The 2017 lecture was given by Dr Katrina Navickas, Reader in History at the University of Hertfordshire, who explored the protest spaces of the West Riding and showed how the county’s distinct topography and spaces within its towns shaped the democratic movements of the early nineteenth century. Dr Navickas is the author of Protest and the Politics of Space and Place, 1789-1948.

The 2016 lecture was given by Dr Robert Poole of the University of Central Lancashire, speaking on The Risings of 1817.

The 2015 lecture was by Professor Malcolm Chase (Leeds University), on York Castle and its political prisoners: the Luddites in a broader context.

The first lecture took place in January 2014, when Dr Matthew Roberts, of Sheffield Hallam University, spoke on  ‘Luddism through the Tory-Radical Looking Glass: Charlotte Bronte’s Shirley‘.  The lecture was dedicated to Lesley Kipling, a leading local historian who died in September 2013.