The Edward Law History Prize was set up in 2017 by the Huddersfield Local History Society in recognition of our member and prolific local historian, Edward Law, who died in 2013.

We are pleased to announce that the panel of four judges comprising members of the society and our partners has unanimously agreed on this year’s winner, Pam Brooke. Her winning article — Death on the Home Front — has been published in the current edition of the HLHS Journal (pp. 16-24) and can be accessed online. 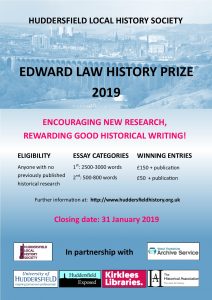 The Society is especially keen to reward historical writing by young people as well as providing recognition to mature emerging researchers of all backgrounds. The condition for entry is that no piece of original historical research authored by the entrant has appeared in any print or electronic publication before the closing date. It is permissible to use parts of unpublished written assignments, including dissertations.

We encourage the entrants to refer to the Huddersfield Local History Society’s Journal index of articles for ideas about the range of local history research published to date. The Panel will be looking for new contributions as well as fresh interpretations of well-known historical issues. Huddersfield is renowned for its global trading links through extensive textile and engineering industries and for its attraction to many migrant and refugee groups arriving here since the mid-19th century. Articles exploring these ‘hidden histories’ are greatly encouraged.

If you would like to enter the 2019 competition, please forward your expression of interest to the Society’s publicity officer at:

Please email your final draft to . Make sure that the email subject is titled as Edward Law History Prize 2019.

The closing date for entries is Thursday, 31 January 2019.

We ask authors to follow the the Society’s Journal style guide. The use of accompanying visual material is strongly encouraged.

Prize Panel
The Prize panel includes two Committee members of the HLHS and one representative of each participating organisation (subject to change).

Publication
By entering the competition, each candidate automatically gives permission to the Society to publish their contribution in the HLHS Journal and on the HLHS website.

The following obituary appeared in the 2014/15 issue of the Society’s Journal:

Edward was a native of Lindley who retired early from accountancy to pursue his interests in local history, genealogy and historic artefacts of various kinds. He became a prolific and skilful writer and an early contributor to “Old West Riding” where George Redmonds felt able to comment “it is clear that his main research interest was the period from 1700 and his sense of evidence and eye for detail were immediately evident…” He had the knack of using material from primary sources and weaving them into interesting stories.

For the Society Edward wrote two publications “Joseph Kaye, Builder of Huddersfield, c.1779-1858” and “Huddersfield in the 1820s” as well as contributing a chapter in the major work “Huddersfield: a most handsome town” edited by E.A. Hilary Haigh in 1992. All of these works, the product of meticulous research, are essential reading for anyone interested in the development of Huddersfield in the early nineteenth century.

In 1992 Edward went to live in Ireland, in County Kilkenny, where he quickly became active in the Kilkenny Archaeological Society. In his later years his voice became familiar to Irish listeners on a programme called “A Glimpse of the Past” broadcast on Tuesday evenings.

A gentle man, popular with members of our Society and all who came in contact with him. He was a diligent and meticulous researcher and presented a wealth of historic and specialist material on his web-sites. His unexpected death from a heart attack is a major loss for us all.

Edward’s web site contains numerous essays and articles which will be of interest to those researching the history of Huddersfield.